Players are invited to interact with another world in Crytek’s VR showcase. Crytek released its Back to Dinosaur Island 2 virtual reality demo as a free download today, giving players everywhere the chance to experience the combined power of CRYENGINE and VR hardware.

Back to Dinosaur Island 2 received a glowing reception when it was first shown to attendees at E3 2015 and has previously only been playable at select industry events. Now, however, gamers everywhere can sample the VR experience firsthand by downloading it for free from Steam.

The demo invites players to scale a deadly cliff face as huge flying dinosaurs react to their presence, and debris rains down from above. Mysterious landmarks on the horizon and stunning vistas on every side combine to immerse gamers in an entirely new reality.

Crytek’s Executive Producer, Elijah Freeman, said: “The feedback we received from people who played Back to Dinosaur Island 2 was really encouraging, and the lessons we learned from creating it have been significant for our current VR projects. The demo goes beyond being merely a visual showcase and includes interactive elements that harness the unique power of the medium. By making this experience available for free, we hope as many players as possible will take the opportunity to feel truly present in a new world of dinosaurs.” 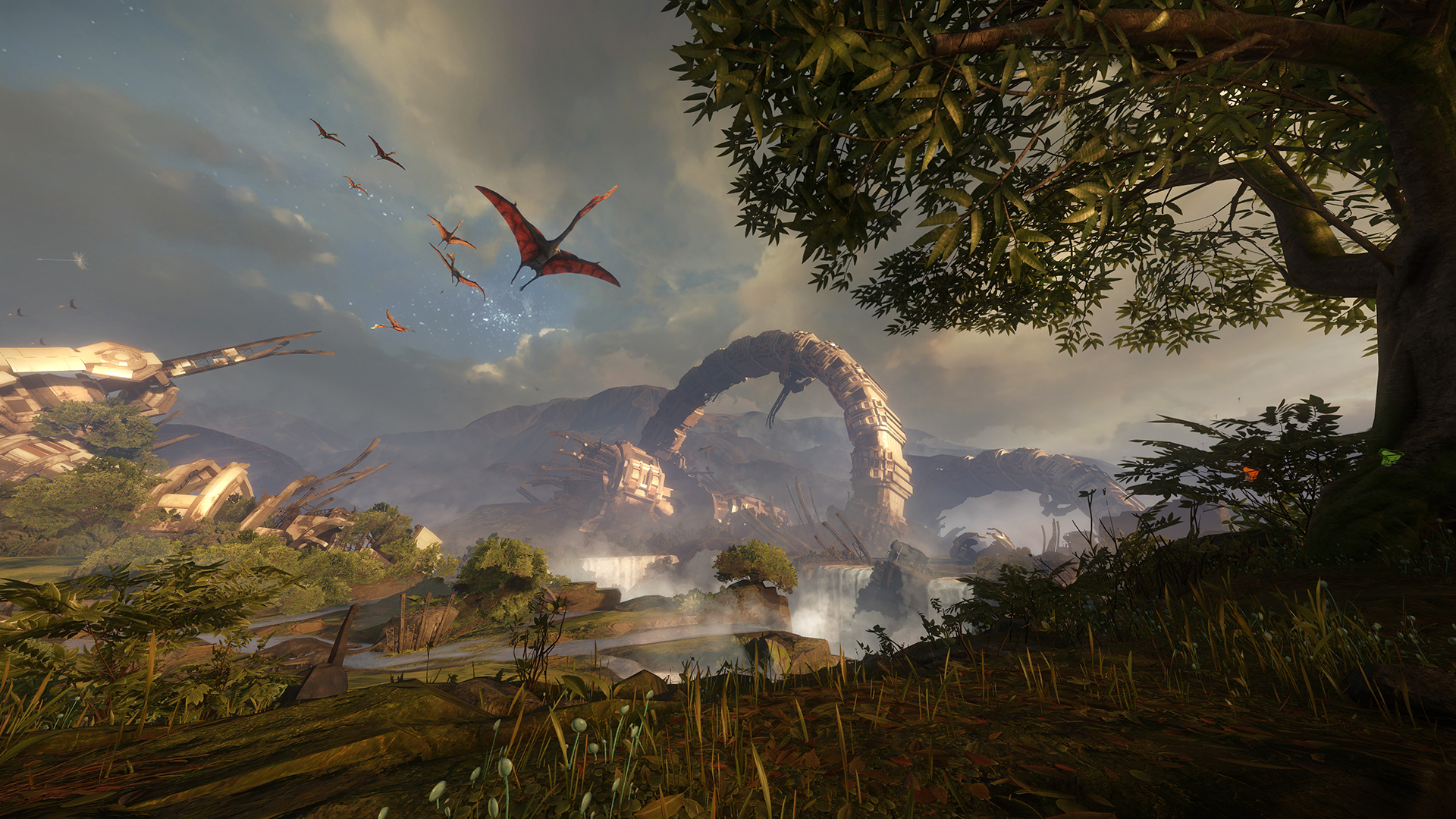 Crytek has also released a video that offers a glimpse of what to expect in the demo. The video is now playing at YouTube, and gamers can visit www.crytek.com and www.cryengine.com for the latest news on Crytek’s ongoing work in VR.

Back to Dinosaur Island 2 can be played using any VR headset with Rift SDK 0.8 and later.

The Unity 5.3.4 public release brings you a few improvements and a large number of fixes. Read the release notes below for details. Welcome to Unreal Engine 4.10! This release is packed with a number of great new features, but our main focus has been to increase engine stability and fix outstanding issues. Hundreds of reported bugs have been bashed, many new quality of life improvements were added, and virtually every supported platform has received updates.

Unreal Engine is designed for incredible VR experiences, and every release it gets better. Epic’s “Bullet Train” VR demo is powered by new features in this version, with new rendering optimizations designed specifically for head mounted displays.

Mobile gets a nice upgrade in this release too, with new scalability features and support for refraction.

Last but not least, great news for programmers: You can now use Visual Studio 2015 for development on Windows. And on Mac, we’ve revamped our Xcode projects to allow you to work more efficiently. We’ve also refreshed our target platforms with support for latest SDKs.

Refraction effects are now fully supported on mobile platforms. Your existing shaders with refraction will automatically work on mobile devices in this release — no extra steps are required!

Your VR games get faster in this release, thanks to new rendering optimizations specifically for head mounted displays. We’ve implemented a new “Hidden and Visible Mesh optimization” to reduce the GPU overhead of VR rendering.

These two optimizations ensure that we do not spend GPU time working on pixels that will not be displayed in the actual device, because of lens distortions. The hidden area mesh works as a prepass, where we take a mesh that represents the area hidden from view, and reject everything behind the mesh. Next, for the post-processing stage, we use the inverse of that mesh, which represents the visible pixels, and then only run post processing on those. By using these two techniques, you get “free” performance! On “Bullet Train,” we saw about 0.25 ms total savings on the PC, where the total frame time is only 11ms. On console platforms you can expect to see much larger performance gains!

Unreal Engine has been updated to Visual Studio 2015 on Windows platform!

Visual Studio 2015 includes many new improvements that should help your workflow, including support for new modern C++ language features like uniform initializers and delegating constructors. The new compiler is also very standards-compliant and will detect more errors in your code.

Important: The launcher distribution of the engine now requires Visual Studio 2015 with C++ support enabled. Please upgrade your team now! If you use the New Project wizard inside Unreal Engine, we’ll help you get Visual Studio 2015 downloaded and installed.

Important: The Visual Studio 2015 installer does not install C++ by default when installing manually. Make sure to choose “Custom” when prompted, then expand the Programming Languages section, and check Visual C++.

When compiling your project the first time, be on the lookout for new compiler errors reported because the new C++ compiler is more strict. Microsoft has posted this document with examples of changes that could affect your code.

The new Material Quality system allows your game to easily scale all the way down to low end devices, without sacrificing quality on more modern devices!

You can now generate Low, Medium and High quality versions of shaders for all materials! With each tier, you can selectively disable rendering features to increase performance on low end devices. UE4 will automatically detect a good default quality level for many popular devices.

Platform highlights in this release:

Using the new Mirror Tool you can easily make symmetrical landscapes. This is really useful for competitive two-team landscape levels!

We’ve updated Motion Controller Components to now do a late-update right before we begin rendering. You can see the difference between a late-updated and a non-late-updated component’s position and rotation below. The screenshot was taken during a normal speed, side-to-side arm motion.

This is the same technique that we use to reduce latency with head mounted displays. We now update Motion Controller Component positions twice per frame: once during the input tick, and once again right before we render. That means that controls will feel more responsive, and better reflect what the player is doing in the real world. This feature is enabled by default.

Here’s what you can do with this feature:

Android now supports Web Browser widgets created either in a Widget Blueprint or in C++ using Slate code. This can be used to display content hosted anywhere on the web, for example a news messages to your users or help text.

Multiple gamepads are now supported for Android along with identifying some common controller types and mappings.

The following Android controllers are automatically detected. Others will fall back to generic mappings.

Other new features for Android controllers:

Quick note about supporting more than one controller at the same time: Pressing a button on an unassigned gamepad will now associate the device ID with the first unassigned controller ID. Gamepad to controller ID assignments may also be queried or cleared with three new Blueprint nodes:

We’ve greatly improved how Xcode projects are generated for your game! You’ll now have access to Xcode’s live issues and “Fix It” features, and indexing is much faster. Plus it’s way easier to switch between build configurations!

Instead of a single project containing multiple targets we now have a workspace consisting of multiple projects, one per target. You now open UE4.xcworkspace instead of UE4.xcodeproj in Xcode. Each project in the workspace creates a single scheme that’s used to build various UE4 targets. What is being built and run is determined by active configuration and platform.

New target selection on the left, old on the right.

You’ll no longer have to worry about which executable to run. Xcode will automatically choose the correct app when you switch build configurations. Please note that changing the active configuration does not update the Executable drop down in the scheme editor, that’s a known issue with Xcode. It will, however, use the correct app when you run from Xcode.

The “artificial intelligence” found in most computer games isn’t very intelligent at all. Characters in the games tend to be controlled by algorithms that produce patterns of behaviors designed to seem natural and realistic, but the characters are actually rigid, with no capacity to learn or adapt.

One company hopes to come up with something a lot smarter by providing a platform that lets software learn how to behave within a game, whether in response to basic stimuli or to more complex situations. The hope is that this kind of learning will eventually allow complex behavior to emerge in game characters—and make for better AI in a range of applications.

Keen Software, based in the Czech Republic and the U.K., makes several “sandbox” games in which players can construct complex virtual structures and machines using realistic materials and physics. This July, the company spun out a business called GoodAI that aims to develop sophisticated AI using machine learning. Marek Rosa, Keen’s CEO, invested $10 million of his own money in the new company.

GoodAI has released open-source software called Brain Simulator that can be used to train a series of artificial neural networks in how to respond to stimuli from a game environment. Through trial and error, these networks can learn how to play a simple game. And several networks can be chained together to create more complex behavior, making it possible for software to learn how to achieve an objective that may require numerous steps.

The company’s researchers have shown that Brain Simulator can be used to train software to play some simple two-dimensional games. These include Breakout, in which a player bounces a ball off a wall of bricks (which disappear once hit), and a maze game that requires completing a series of different tasks.

Learning associations and patterns happens to be a key goal for AI in general, which is why Rosa hopes to eventually develop forms of artificial intelligence with broad utility beyond games. That’s reminiscent of the approach taken by an AI startup called DeepMind that Google bought last year (see “Google’s AI Masters Space Invaders”).DeepMind is using customized machine-learning approaches to teach software to play various simple games.

AI researchers have long used game play as a way to test artificial-intelligence software, says Roman Yampolskiy, an assistant professor at the University of Louisville. “From checkers to chess to poker and go, some of the greatest accomplishments in AI research have been demonstrated around the game board,” he says. What’s interesting about the approach GoodAI and DeepMind are taking is their computers are not given prior understanding of a game’s rules, he says.

However, it’s still not clear whether the strategy will be useful beyond games. Yampolskiy, who has looked at GoodAI’s software, says that while it is a worthwhile contribution to the field, it may be very hard to use as the basis for a more general-purpose AI.