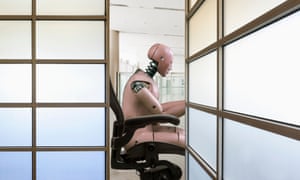 Jobs for the bots: robots will take on mundane work, enabling humans to focus on interpersonal tasks.

There’s a clue to the future of work in the relief you feel when your phone call to a big corporation is answered by, of all things, a human.

It makes sense. People are replete with empathy and compassion, like to solve problems and enjoy communicating through stories. And these profoundly human traits are the areas where artificial intelligence (AI) trails humans. Because they are our strengths they point to the future of the office and to our workplace relationships with robots and AI.

In the future, people will spend more time dealing with other people rather than investing their energy in spreadsheets, machinery and computer screens. Rote decision making, repetitive tasks and data management will be owned by our silicon-chip workmates.

You can already glimpse this labour allocation in action – there are accounting apps that extract the information from photographs of receipts and automatically compile end-of-month reports. Meanwhile, the accelerating capability of AI to understand spoken human language will cause immense disruption. “Will we ultimately be able to replace most telephone operators? Yes,” says Paul Murphy, chief executive of voice technology company Clarify.io. “In fact I’d say speech recognition and understanding has the potential to eliminate any job where the role of the human is that of intermediary.”

Meanwhile, we will be employed to tell stories, empathise, see the big picture, solve complex problems and adapt fast to changing situations.

Rather than displacing humans, AI will augment human strengths. This will lead to the invention of new roles, which fall into three categories.

AI and robots excel at following pre-set rules. People will thrive when they learn to harness machines for data insights, which they can use for problem-solving and innovation. An architect, for example, will be able to work much faster than today because of the range of technologies available, such as augmented reality visualisation and virtual reality headsets. But providing a solution that fits within the constraints of space, planning restrictions, budget and aesthetic style would be nigh-on impossible to automate.

Computers can’t see the context, connection and patterns that humans can, despite crunching vast amounts of data at speed. For example, an automated ad-buying program might be brilliant at buying online advertising space for the right audience at the right price, but it might fail to realise that the day after an air accident would be the wrong day to advertise certain products or certain taglines. The future will involve people who oversee machine decision-making.

The analytical powers of robots enable them to suggest decisions in healthcare, financial investment and other areas based on huge quantities of data. IBM’s Watson computer, for example, can monitor a vast array of data inputs to identify possible medical problems and propose courses of treatment. But the communication of advice and the contextualised understanding of the best course of action for a specific patient is best handled by humans. As with medicine, so with finance: the role of the specialist human will be to mediate between the wonders of automation and the needs and desires of the patient or customer.